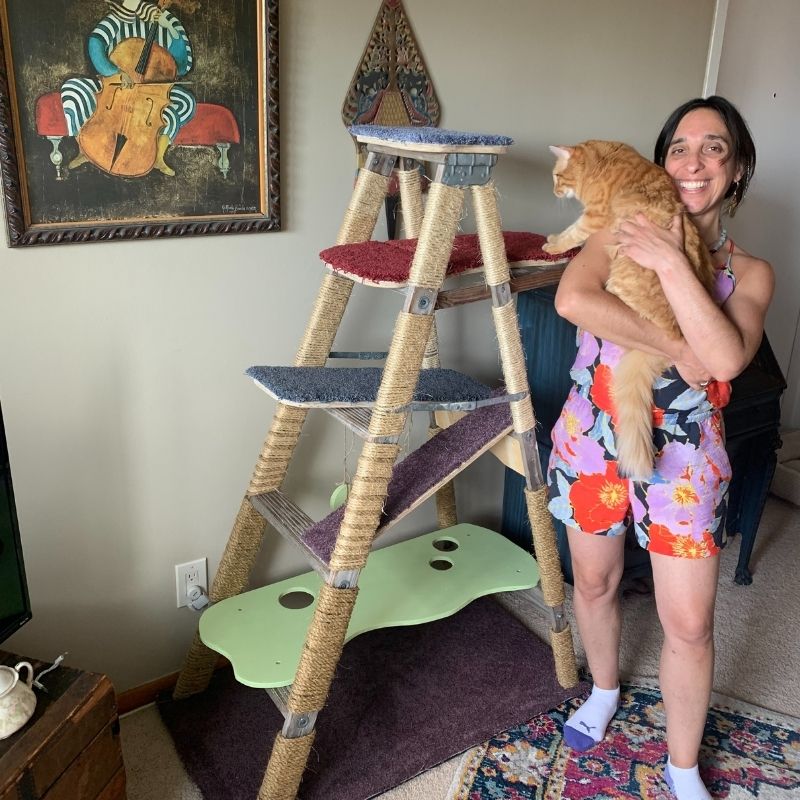 From Inspiration to Completion

Halfway through this project, I almost gave up. The workload was daunting and the amount of time each job was taking felt overwhelming. I never knew it would take this long, but it was So worth it at completion!

Read on for the full story! 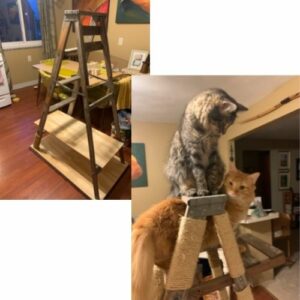 Last summer, a friend told me she’d sold an old, wooden ladder online for $40. After that, I kept my eye out for old wooden ladders and happened to find two of them on the curbside, which I put into storage.

Not sure how I’d use them, or whether I’d sell them or not, I kept them in storage until this spring. One day, I had an idea pop into my head: what if I created a fun “cat playground” with one of those old ladders for the kitties I adopted last year?

What a great idea! I’d never thought of that before. The inspiration came out of nowhere and just bop, it was in my head! I knew exactly which ladder I’d use, because one was a bit more run down than the other, and I started talking with a friend, who’s a big D.I.Y. genius and total handyman, about the project.

The first suggestion my friend gave me was to look online. What had other people done? Had anyone made a cat playground out of a ladder before? Yes, indeed, they had! So, I found some good pictures on Pinterest and got inspired from there.

This project was far from a straight path, though, as I would find out once we got started.

After researching online, my friend suggested that I create a bunch of sketches of how I wanted the ladder to look, what layers and levels I wanted on the ladder and any other toys or extras on the ladder for the cats.

As I sketched out a few ideas, I thought I was pretty clear. Using one of the pictures of another “cat ladder” I’d found on Pinterest, I was basically going to copy their design, to a certain degree, and then go from there. But, I soon realized, when we got started, that my ideas were not as clearly formed as I would have liked them to be. 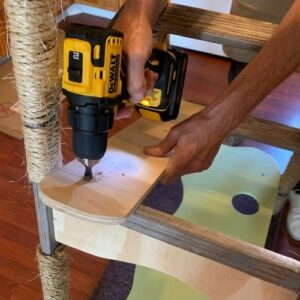 First of all, I was a complete newbie to this type of carpentry, D.I.Y. project. Luckily and thankfully I was working with a friend who knows a ton about household and construction type projects. He has most of the tools too, and knows how to use them, which was a big bonus!

Had I embarked on this journey alone, I never would have been able to make something as well built and good looking as I did. His help was indelible!

As we got started, though, I realized how much I didn’t know, even down to the size drill bit to use for the size screw that I had, etc. These simple little things took time to figure out and the “rusher” in me did not like that! Impatience can be a bug, but if I could calm down and take things step by step, things would work out much better anyways! I mean, really, what’s the rush?!

Taking Things One Step At a Time

Honestly, there were several times I thought, “I don’t want to do this anymore. How long is this going to take? I’m not sure I’m into this project. I just want this project to be done!!!!” But, the reality was, that I had already started and if I kept moving forward, I knew I could eventually complete it.

Several times, my friend, the handyman, and I would say laughingly, “Gosh, it would’ve been so much cheaper to just have bought one of these things!” OMG, ain’t that the truth, in addition to saving a ton of time and energy. The rewards of doing it myself, with a ton of help from others, was worth it in the end, though!

Three things I had to do to feel better about this project: manage my expectations for how long this project was going to take, not try to do everything needed for this project in a day and give myself space and time to break things down into bite sized pieces, doing all the things I could do myself, without my handyman friend, so I’d be prepared when he came over to help me again! This also meant that I couldn’t completely lean on him anymore. I was learning and I had to start taking some steps on my own. Once I did, I became more resilient, empowered and clear on how to get this project completed in a good way.

Frequently throughout this project, I kept reminding myself: just take it step by step, one step at a time, like you did with the couch cushions project.

Once I reminded myself of this concept, the project started to flow and the cat ladder slowly and surely came into existence!

Sometimes in Life, things can feel hard, daunting, confusing, frustrating, overwhelming and down right bad! Does this mean I stop, back track or don’t finish the project? No! It means that I assess whether this is something I really want to do. I get clarity on what needs to be done and the step by step process of how to complete it. I also challenge myself to move through the hard or uncomfortable parts. Life is not always a smooth sailing ship, but it can be fun, even in the wild or difficult times. So, how about taking it on and saying, I’m gonna do this and figure it out? And, I always have a choice. If I would rather stop a project and move onto something else, I can do that too. No shame! 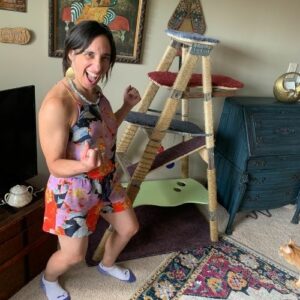 In the end, the cat ladder turned out SO beautifully! With help from my friend, my brother and his work mate, my dad and others, who offered suggestions, as well as those who’d gone before me and posted their pictures on Pinterest, I got there in the end!

The feeling of completing this project felt so rewarding. It was such an accomplishment.

Did it scare me away from doing D.I.Y. projects again? No. It makes me feel So good every time I see the cat ladder and the cats enjoying it and playing on it.

How does it feel to move through resistance in your life?

What does a feeling of accomplishment do for you, those around you?

What is that one project you’ve been putting off? How about writing out the first four steps to accomplishing this project and just start with the first one?! Let us know how it goes in the comments section below!

Share your comments below and let’s get this conversation started!