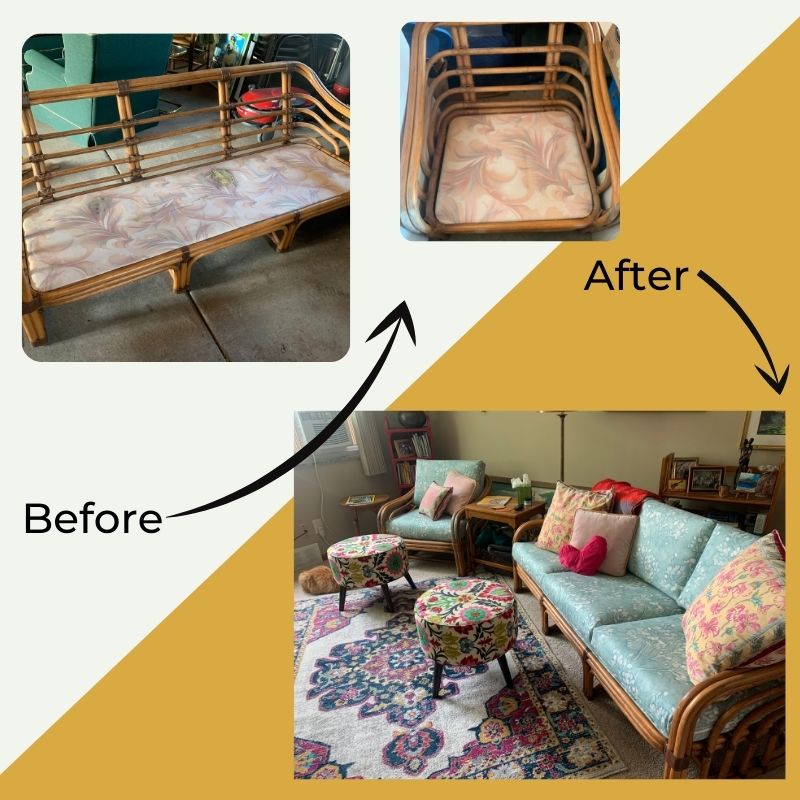 This is the third in a series of blogs centered around Marie Forleo’s famous phrase, “everything is figureoutable.”

In today’s blog, I’ll tell you the story of how I learned how to take one massive project step, by step, by step to its completion.

Don’t be scared! Just take the first step and get into it. You will figure it out (even if that means you decide not to do the project afterall!)!

Around November, 2020, I was leaving my brother’s house, in the city, and drove by what looked like an incredible curbside find: a rattan couch and matching chair set.

It was already dark outside in the late fall evening, but I could still see that the couch and chair set looked like it was in great condition, so I put the car in reverse and got out to take a closer look.

Wow, what a score, I thought, as I called my brother to see if he’d come out and help me move it into his garage (he lived just a few houses down from the curbside couch).

Throwing the cushions off, we lugged the couch and chair back to his garage, where it sat all winter.

A reminder had been in my phone for months about picking up the couch by the time spring rolled around, however, the immensity of this pending project loomed and I had a decision to make. I was either going to make cushions for the couch, which I had no idea how to do, or I was going to sell the couch and chair frame online. What to do?

The fear associated with taking on such a big project was daunting. First thing I did was contact upholsterers to see how much it would cost to have the couch and chair upholstered professionally. The one quote I got was for just over $2000. After that quote, I thought, I can do this myself!

Luckily, I have a great friend who is very skilled in all things D.I.Y. So, I talked at great lengths with him about the potentials of the project and then decided to jump in! After all, doing it myself might cost around $500 instead of $2000!

First thing I set out to do was look online for a pattern for couch cushions, which I soon found out are called “box cushions.” As luck would have it, I found a video for the “30 minute cushion” from a company called Sailrite. This cushion looked doable and the online video tutorial walked me through every step of the process. In addition, they have a fabulous “fabric calculator” on the website that figures out the exact measurements of all the fabric, zipper length and seam tape needed for your particular project. All I had to do was measure the couch and chair and plug in the numbers.

Sounds easy, right?! Not so much.

As I started measuring the couch and chair, I wasn’t sure how high I wanted the cushions to come up in the back or how far I wanted them to stick out in the front. Dang, I realized by having saved a couple of the cushions from the curbside find, I could have just measured those to get a better idea of how big the cushions needed to be. One important lesson learned! I could also have taken the covers off the old couch cushions and used those as patterns for the new cushions, saving me potentially hours of work! Another lesson learned, in highsight!

Needless to say, I decided to look at pictures of other rattan couches to see how big their cushions were. This helped a lot. And, I decided how thick I wanted the foam to be, so I could properly measure the cushions for the backs, which would rest on the top of the bottom cushions.

Measuring and re-measuring, to make sure I absolutely got it right, I then went to the fabric store. Looking for fabric for this project was a test in itself. Many stores only carry so much fabric in one pattern. Would they have enough for the entire project? Would the couch and chair have to have different fabric on them? What I eventually realized is that I needed far less fabric than I originally thought, which helped a lot!

But, the fabric calculator wasn’t as easy to understand on the website. Which way was the fabric going to go on the pattern? Was I getting the length and the width right? I wasn’t sure. I emailed Sailrite to get some advice. They told me as much as they could, so I thought I was more clear, but I still needed help.

The second trip to the fabric store yielded fabric that I bought for the couch cushions, but it wasn’t exactly what I wanted. A store clerk helped me out considerably, but I just wasn’t sure I had it all right. Then, I decided to bring the fabric back and pick out something new. Luckily they had a beautiful patterned upholstery fabric in the right color with enough for the entire project, but I still wasn’t sure if I was putting the calculations into the fabric calculator right. Another store clerk helped me this time and took a lot of time with me to figure out exactly how much fabric I needed.

Oh…I was nervous. Did I get enough? Am I doing this right?

Sewing It All Together

One important part of this process is that I took it step by step. I never tried to get ahead of myself and do too much at once, like I can do at times. So, as I finished one step, I just took the very next step, even if it was a small step.

That’s what happened when it came to sewing. The sewing machine I had from my mom hadn’t been seriously used in years, since I had a clothing redesign business on Maui in 2005-2007. So, I needed to relearn how to put thread on a bobbin and use the machine properly.

One evening, I decided that was the only thing I was going to accomplish: putting the new thread onto a bobbin. Looking up tutorials on youtube, I found a video, followed along and the thread was not spinning onto the bobbin properly. Ugh, what is happening?! I didn’t know. So…I decided to contact the local sewing machine store that services the type of machine I have and took it in to get some help.

As you can see, this was not a clear, straight linear pathway, because I’d never done anything like this before! The path wove and swerved and reversed and moved ahead. I stayed in the moment and kept moving onto the next step, no matter what!

Getting professional help with the machine was priceless. I’d bought the wrong thread at the fabric store and that’s why it wasn’t spinning onto the bobbin! New, correct thread in hand, sewing machine looked over, dusted off and given the green thumb and tutorial on how to thread a bobbin, along with purchasing some more products that I needed, was so helpful. Then, I knew I was ready to jump in and get started on those cushions!

The process of making the cushions would also be broken down into steps, as the cushions were different sizes, etc. So, I started with measuring and cutting, which took three + hours to do. Then, I had to iron the fabric. Then, onto the actual assembly of the fabric, step by step by step, which required watching the video tutorial slowly and multiple times, as I made the first few cushions!

Eventually, the project was complete. I had eight box cushions with zippers ready to be stuffed with foam for the couch. But, the couch needed to be cleaned! After all, it had been in someone else’s home for who knows how long! There was dog hair on it, dust, etc. So, that was the next step.

Once the couch and chair were cleaned and the cushions were back, filled with foam, I could take out the former living room furniture and bring the couch up. This was an exciting process!

I felt so proud that I had done this, from start to finish, and now had a beautiful couch-chair set in the living room to enjoy!

If I had stopped at, “I don’t know how to do this?” I wouldn’t have this beautiful furniture in my home now. If I had tried to jump ahead and do too much at once or rush into the project without measuring two to three times before starting, it could have cost me way more money and time than I spent!

All in all, the cost and time spent was considerable and the rewards lasting!

The feeling of self-accomplishment: priceless!

What’s the one thing you’re putting off because you “don’t know how to do it?”

What about taking just the first step in the process to get it going?

How might this impact your confidence, self-assurance and sense of accomplishment you may feel from enjoying your work afterwards?

Thanks for reading! I look forward to hearing from you. Let’s get this conversation started!